I Am a Kinglet! Unique Bird Inspired Eye Look

I was out in the garden up to my eyeballs in dirt when my son showed me this amazing Kinglet bird. I could not stop thinking about that bird, until later, when I had sat down to spin up some rainbow wool, I had to stop what I was doing and recreate this look in makeup.

I forgot to label on the photo that I also used Milady red side of the Mineralized Eyeshadow as well as Firespot.

I used Blacktrack, Frostlite, and Lancome Colour Dose in Tupai as eyeshadow bases under the shadows that I used.

I was in such a hurry to do this and post it so I could get back to my work, that I forgot to label the photos with that too.

Oh, and when it is getting darker out, sometimes my camera goes nuts with putting lots of red into fleshtones. Apparently it decided to go nuts last night as the sun was setting when I took this. I think you can still get enough from the photos to make it worth it though.

I have no other makeup on except for the eye. I just HAD to show you all. 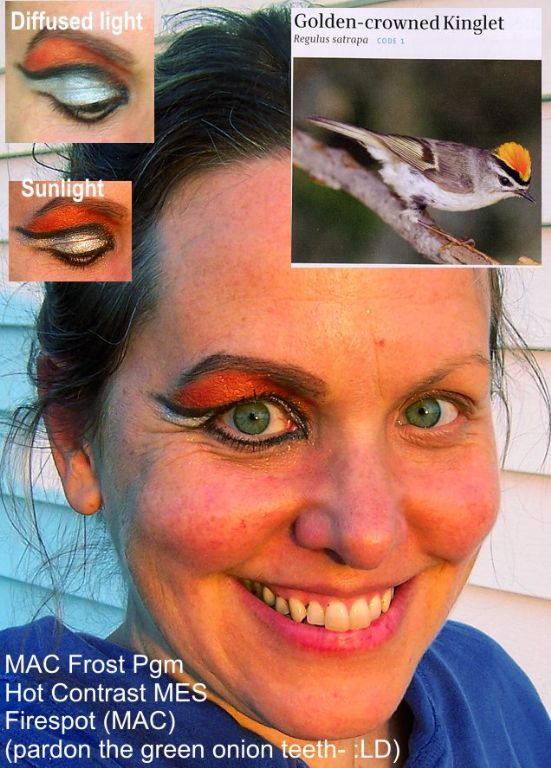 What a pretty bird! I think you did a wonderful job recreating it! I just love your eye color... sooo pretty

Wow great job. Love the bird, amazingly it's perfect for the eye too! Wow!

Perfect recreation! You're so creative. This looks awesome!

wow, this is really cool!

BIRDS. The inspiration of them all! You go girl.

I always love your looks. This one is amazing, I think you captured the bird's plumage perfectly!
M