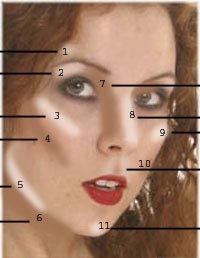 Remember the key is blending. Most contouring is blended upwards and outwards.

Contouring is generally done with creme or powder base products- contour being a noticeably darker shade with the same base tones, highlight being noticeably lighter with the same base tones. Avoid using pure white for highlighting, as some light will pull the starkness out in the white, and it looks very unnatural. An offwhite or ivory is a better choice, for those with very fair skin. I prefer using a contour powder, and a highlight creme, but this is just my preferance. My products of choice are Mehron's Celebre line pressed powder in Contour I, and Ben Nye's creme in Ultra-light. These same effects could be achieved with blushers and/or stick foundation, if the appropriate tones are available.

1- Shadow is placed in the temples, and highlight is placed above and below.

2- Highlight is placed on the brow bone on the outer half of the eye.

3, 9- Highlihgt is placed on the cheekbone, coming up to meet outer corner of the eye.

4- Shadow is placed below the cheekbone, blending into the hairline.

5- Highlight is placed along the jaw line, along the outer edge of the jaw.

6- Shadow is placed below the jawline, blending into the neck.

7- Shadow is placed on the inside corner of the eye, blending to meet the highlight on the browbone, and also blending down along the side of the nose.

10- Highlight is placed on the ridges of the cupids bow, with shadow in the valley, blended down towards the lips.

11- Highlight is placed in the center of the chin.

Very helpful, but I was wondering if you have a photograph of someone with their contouring done & blended. Thanks!

Not sure if I'm able to post this here, but here's where you can find another contouring technique. They have another one with a cream foundation as well as powder: http://www.howtobeauty.com/Makeovers...lesson_one.htm
hope this helps! NOTE: It *is* a bit heavy, but I find it nice to use as a reference.

Holy moly, thanks for the link, that site is awesome.


Oh yes thank you for the site Dreamergirl!

Here's another one for different face shapes: http://www.movingmakeup.co.uk/lessons.htm

Thank you, very much. I have been so many time looking for how to contouring. finally I know.

Alright, I'm gonna sound a little stupid perhaps... but with contouring... do you apply foundation as a base or something and then work with the concealers and highlighting colours, etc etc? Or is foundation not used on the face?

I posted this Contouring chart on another board... I took it into photoshop and colored it so that I could apply my MU without reading. I figure I'd post this here as well. Click on the link to see a video of the technique.
http://www.marthastewart.com/portal/...&rsc=ns2006_m1

I like the face chart, it really helps get the contours in the right zones!

thank you ladies for taking the time to post the face charts, this helps tremendously!

All of this info is incredible. Thanks girls!

Thank you for your picture

this is a great face chart. I have been wanting to see one for some time. it can be hard to see how to contour correctly based on someone's face. The chart shows me where the contouring goes to achieve the right look. thanks!

This is extremely helpful!