Does anyone remember these from the mid-90's? I remember having one, but it was nowhere near as cute as the ones they get overseas! 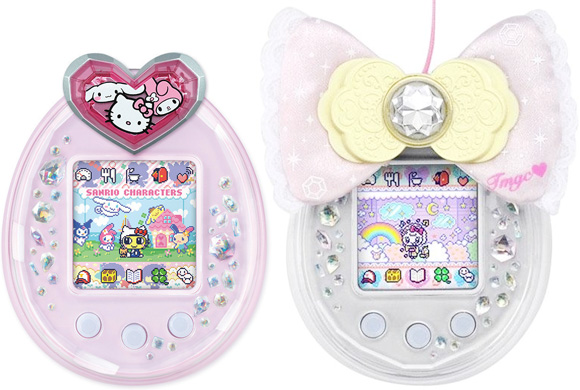 Recently I got bit by the bug to revisit these as toys. I just really like the idea of it being cute to have in my purse and also have a little pet to take care of. You can find the Japanese releases on eBay and amazon for sale, they have color displays and they're SO CUTE but they're not in english. There isn't much to Tama's so even in Japanese you can still figure out how to take care of them. There are tons of videos on YT as well on how to navigate the screens.

I'm still intimidated by the language barrier though so I decided to look into the English releases and found out they're relaunching them here in the US this month. For this release they're called Tamagotchi Friends, and while the packaging isn't as cute the price point is only $19.99 compared to the $70-$80 you would spend on the impossibly cute ones. I pre-ordered one of the Tamagotchi Friends from a online toy store, I think it releases at the end of the month. I also ordered a Tama-go from Amazon, it's an older US version of Tamagotchi they released back in 2006.

While I was researching Tamagotchi I also stumbled across a September 2014 Asia release called Tamagotchi 4U. It's apparently aimed at ladies who owned the original Tamagotchi, so it's a little more of a "adult" version Tamagotchi. It has NFC to interact with "spots" around cities so you can collect items for your Tamagotchi. Super cute, but it's not going to be distributed to Europe or the US though so you would have to import it from a Japanese toy shop if you really wanted it.

I'll share pics of my Tama's as they arrive. What about you? Did you have Tama-pets? I want to see your pictures if you have any!

Wow!! Way cuter than the one I had as a kid! Nice find.