Will gay marriage lead to the downfall of society?

Life is too short and too hard to pick on people that aren't like you. Honestly, live and let live. Love is so hard to find, why make it even harder for some people??

There are many other factors that will play into the downfall of society. Kids having sex too soon, greed, laziness the internet promotes, shortcomings of public schooling...things like that. Gay marriage shouldn't be lumped with those REAL problems with society today!

Fair enough - but I think a number of people who find divorce necessary also shouldn't be getting married to begin with and have blatant signs to the fact before they do tie the knot.

I don't really understand what you are saying- because I fully support divorce means that I shouldn't get married?

And divorce happens for many reasons- whether it is they simply fell out of love, there is abuse or they simply do not click as a couple any longer.. Also, if someone is in head over heels in love, believe me, they don't notice any signs.

"The state has no business in the bedrooms of the nation."-Pierre Trudeau (Canadian Prime Minister)

The article seems to be gone now, I would actually have liked to read it.

I live in a country where gay marriages have been around for decades, and are widely accepted now. The first gay couple got married in 1989 in Denmark, and many many have since followed.

And no, it has not lead to the downfall of our society

This is a civil rights issue, it has nothing to do with religion no matter what you may think. If churches don't want to marry people because of whatever reason, that is their business but the government of the United States should not be denying some citizens rights and benefits that it gives to others. This is absolutely no different than allowing people of different races to get married.

Just wanted to tell you that you didn't miss much. Second: it's awesome that you're from Denmark (I'm interested in Germanic languages).

Oh really? That's a nice interest. Do you study it?

Would this country/earth go UP if we imprison everyone who is homophobic or intolerant??
I am so sensitive on this matter.
Ignorance can lead us nowhere...

If you discriminate someone for the things that he/she couldn't choose it says more about the society than about the (e.g.) gay person.

Didn't we have this bullshit a few decades ago about mixed race marriages?

The only people who have any issue with this are defintively homophobic, which is EXACTLY the same as being a racist! It's narrow-minded, pointless and disgusting.

Interspecies marriage is an entirely irrelevant point! People can already legally marry animals in some countries.

Secondly, we have a fucking collosal population crisis!! People who believe everyone should be heterosexual and reproduce are only making that worse!

Think of through the ages how many men and women have had to fake heterosexuality to remain "Acceptable" by the society they live in! These people do not deserve to live a gigantic lie!!

I feel the main issue is Religion.

Don't get me wrong, an individual christian, muslim or whoever is fine, if I were judging people on thier faith I would be just as bad. But a group of people who believe anyone who fancies a slice of a different pie gets executed, penalised, left out of heaven, or even looked down on cannot be following the word of a God who made all.

If God made all, God made gay, and the opportunity to be so.

I'm inclined to have insane angry babbling rants about this subject so I will STFU now.

List of countries which permit or outlaw homosexual behavior - Indopedia, the Indological knowledgebase

You know what is ruining today's society? DIVORCE! Not gay marriage.

It's not divorce. Divorce is a necessary part of a society that believes in the freedom to choose who we marry and we all make mistakes, even major ones. And some people don't take marriage seriously, but we have the freedom to do that, and to be honest, I feel that freedom makes for a better society.

What's "ruining" society is the people who believe that they have the right to dictate the lives of others.

I kind of think it's funny this notion of "ruining" society though, as if there was a time where everything was good with our society. The fight for freedom is forever evolving for many different issues and there are always people completely prepared to oppress others.

These people who hide behind religion and protection of marriage are just trying to find a justification for their homophobia and intolerance. The whole defense of why homosexuals shouldn't be able to marry is laughable at best.

Coming from a society where divorce isn't allowed, I completely disagree. Sucking it up and staying in a bad marriage is not helpful to society.

Not having gay marriage is already the downfall of society. It promotes discrimination and encourages oppression, and provokes violence.
Plus its getting really annoying with all the damn marches and screaming to fight for equal rights...just give it to them so they can shut up and we can all move on...save energy to fight for other stuff, like being eco friendly, and ending poverty, providing healthcare to the country.

My bad, this is an old thread

This country is supposed to be organized around what the people want it to be, not specific values or the Christian agenda. It should reflect American values, and if Americans choose to be more accepting of things like gay marriage, then things will change. As they always have. The institution of marriage has changed several times, and societies continually change. Interracial marriage used to be illegal too, but it eventually became legal. There is nothing wrong with a person wanting some things changed in the society he or she lives in because societies cannot be tailored to fit the needs of every individual person. I personally disagree with the idea that gay marriage is related to polygyny or polyandry, but even if polygamists were to argue that it is, there is a big financial difference. Gay marriage would only require benefits to cover one spouse, which is the same situation for heterosexual marriages, and in polygamist relationships benefits would be required to cover several spouses,which could end up being quite expensive. It's simply a different situation. But, say that there was no difference between gay marriage and polygamy, fundamentally I have no problem with the idea of polygamy either. If it only involved consenting adults, meaning people above the age of 18, I cannot really object to it. It's not my position to tell adults what they should or shouldn't do to make themselves happy if the practice(s) doesn't harm anyone else. I have a small problem with the psychological aspect of polygamy because I would be concerned with the several spouses in the relationship not feeling satisfied with the amount of attention that they receive, but again, that's not up to me.

I somewhat agree with you.

Maybe encourage young people to wait to marry in some situations. Encourage relationship counseling long before and during the marriage. 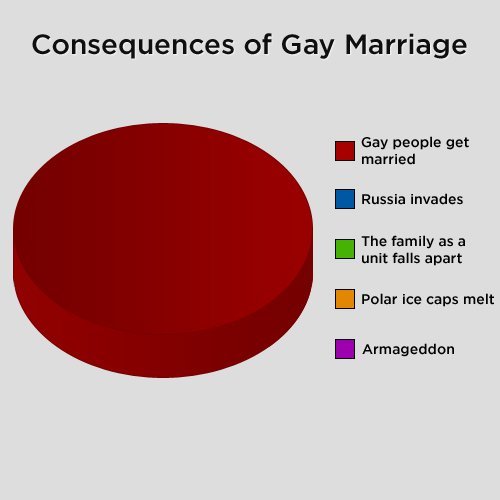