Since we have some detailed information on the Spring collection, I thought it was time to start a new thread.

Details can be found here:

Also, following the introduction of the Kiss Kiss lipsticks this past Fall, Many of the Rouge Automatiques seem to be on the way out...

Here's an image that I snapped at a Guerlain counter recently, showing which ones are marked for death: 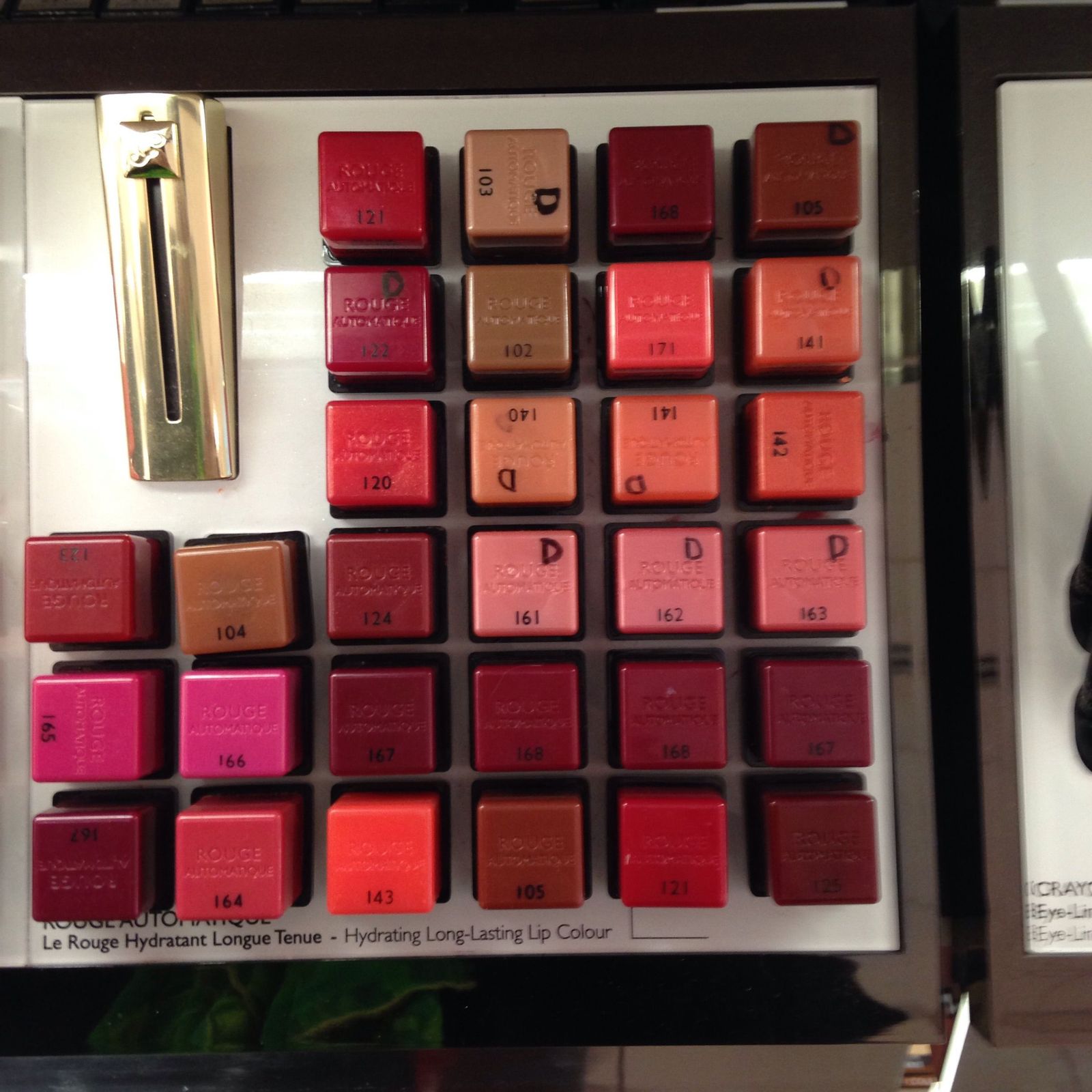 I went to another counter today and they had ONLY the following (some of which are marked as discontinued in the photo above):

This leads me to believe that the whole line may be on the way out, or the entire palette is being revamped. If you want any of the existing ones, you might want to grab them when you pick up your Spring goodies.

I wish there were 1 or 2 glosses too!!! But overall the collection looks promising!!!!

Thanks for the new thread and recap, katred!

I still can't believe they're discontinuing most of RA line.

You might as well add (100) Après L'Ondee and (101) Violette de Madame because those two shades are getting harder to find in stores and online. I think (120) Coque D'Or is on the safe list for now along with Nahema, Champ Elysees, Rouge D'Enfer, and Shalimar. I hope it's a revamp of the line with new shades with names of perfume names long forgotten but I highly doubt it. They better not touch the SA line. -_-' From online swatches I only like three shades of the entire revamped Kiss Kiss lipstick line.

I agree with you on the the spring collection name, like wtf is up with that. :/ Same goes for the Baby Glow cream. Is it a base or a foundation? Will it have baby glowing powers or is it a perfect marketing gimmick? lol Those two eye shadow palettes look amazing though and the compacts are to die for. I still don't like the cardboard packaging of the meteorites, that fancy paper with cherubs better be sturdy.

Luckily for my wallet, I believe I will only be picking up a compact thanks for the lovely recap!!

Brilliant thread thank you I would like the metorites and maybe either of the lipsticks May try the compact but not sure depends how money is Brill thread roll on 2015 !!!!

Beautiful promo pic, although still Natalia. Gorgeous dress although just a peek of the top. Love the palettes, especially the light pink and blue one. The packaging of the meteorites is pretty, but I don't like cardboard too, and it reminds me of Paul & Joe makeup which has creative and adorable prints but in cardboard. I was finding "Les Tendres" and "Attrape Coeur" familiar and confusing, thanks for making things clear, katred. Is there a RA? In the promo pic with the stack of meteorites and other things, there is a RA, but there's no description.

Sorry to hear about the death of RA shades. I guess Guerlain is editing the line. I haven't try a RA yet, I feel the rims of the lipstick is wide due to the mechanics. I feel I have to twist up the bullet a lot or my lips will knock on the rims. But I examined the line when they were launched and nearly bought 1 or 2, Après L'Ondee and Champ Elysees.. I have a mini Coque D'Or though!

I love the Meteorites compact! Think I will have to get that! The name "baby glow" creeps me out a little, so I think I will skip that... On an unrelated note, I can't wait for Guerlain summer and the bronzers

Rinstar said:
On an unrelated note, I can't wait for Guerlain summer and the bronzers <3
Click to expand...

I'm eager to try the compact/pressed form too. I laughed when I read the name and it creeping you out

​I love the terra-cotta bronzers and hit
just recently hit pan on one.

I have yet to try a Guerlain bronzer. I'm kind of just getting into Guerlain, but I am definitely going to get one this summer!

Rinstar said:
I have yet to try a Guerlain bronzer. I'm kind of just getting into Guerlain, but I am definitely going to get one this summer!
Click to expand...

I LOVE them and use it everyday to set my cream contour product.

Thanks for setting up the thread. My list remains the same; the pressed meteorites in Medium/Beige (whatever the light warm ones are called) and the blush pearls.

Rinstar said:
I have yet to try a Guerlain bronzer. I'm kind of just getting into Guerlain, but I am definitely going to get one this summer!
Click to expand...

Welcome to the world of Guerlain, home of hardcore bank account abuse.

I haven't tried one of their regular bronzers yet either, although I did get the LE Terra Inca one a few years back and I love it. I honestly don't wear bronzers very often, because they tend to look like dirt on me, but I'm very tempted by the lightest one of the 4 seasons bronzers (00). Perhaps I'll add it to my Spring haul... Not that I need to add anything. So far looking at both palettes and the balls.

IN other news, I spoke to one of the ladies at a cosmetics counter I frequent (the same one I mentioned above that only had 9 RA colours left) and she says that the entire Rouge Automatique line is being discontinued. Many shades have been discontinued already and the others are available just until stock is gone. One little ray of hope: she wasn't sure if this applied to all counters. I did stop by another counter recently and there was no evidence that the RAs were going anywhere. That may mean that certain retailers may continue to carry the line, or it may mean that that particular counter has more stock on hand, so hasn't had to remove any shades yet. There wasn't anyone about that I could ask.

Bottom line: At best, the RAs are going to become harder to get, but it's possible that they'll disappear entirely within a few months.

I can't wait for this

charismafulltv said:
I can't wait for this
Click to expand...

Neither can I! I haven't been this excited about a collection in awhile.

So pretty! Thanks for posting!

So ready for this!!!

NaomiH said:
So pretty! Thanks for posting!
Click to expand...