Help! In need of E/S that reflects Lime Green!

Hey ya'll! So I've thought up a gorge look but I am missing one or two components and I KNOW you guys are super at this kind of thing. So, I want to do a black smokey eye with the traditional black all over the lid, then I'll probably blend at the crease with an emerald green so the black is not as harsh. I'm going to line the lower lashline with a lime green eyeliner (MAC Colour Matters) for a nice pop! of color. And on the lid I want to pull the lime green onto it by using a shadow that reflects a lime green sparkles that are close to the liner in color. I am going to concentrate that lime shadow on the ball of the eyelid just so it adds a pop of color, but ill blend it out a bit on each side so it fades nicely.

Now for the hard part:
Can anyone suggest a good emerald tone shadow that will be nice for blending up that black???
And, can anyone suggest a shadow thats gonna reflect lime green shimmers or sparkles??? I want the lime green to be pretty close to the liner in Colour Matters. Also it will be over a black base so the reflects of the shadow will show through more than the base color of the shadow.

I LOVE LOVE LOVE Humid by MAC, it's a gorgeous color and really is a true emerald, for the look you are going for I think you will like it

as for the lime green, I have no suggestions

attatched are two pictures of me wearing Humid on my eyelid and Club on the outercrease. hope I helped! 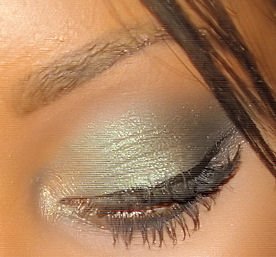 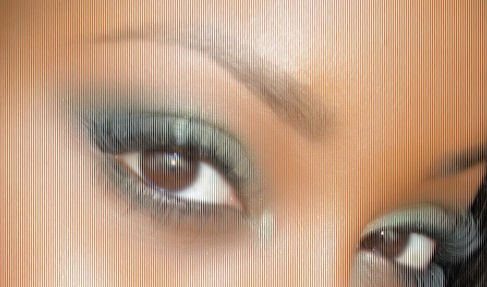 You say lime green, I think Bitter...you say emerald, I think Humid. You may want to try a combo of the two.

I agree with forgetregret. And I also think that humid would be a perfect emerald green color. good luck, be sure to post pics!