The 217 was bought from MAC so no doubt about it. The others, 213, 210 and 228, were bought from eBay and all came with the cellophane sleeve and bar code stuck onto it and all were claimed to be 100% genuine. The seller that I bought them from doesn't sell a lot of MAC brushes and they don't sell sets either, just a small handful among a large variety of other cosmetics, which is was why I thought and hoped they might be genuine.

They look identical to the real thing in every way, except when held up to bright daylight. I've never had occasion to hold them up to window before, and it happened by accident today when I noticed that two of them, the 213 and 228, have slightly paler handles. If I don't hold them up to the window in bright daylight, I can't tell the difference between the colours, they look exactly the same.

The MAC logo and numbering on the 217 and 210 rubs off far too easily just using my finger. On the others, it takes quite a bit of scratching to begin to get the silver off.

The ferrules on the brushes with white bristles are different to those with the darker bristles which seem flatter without the "curvy" bits to them, or maybe this is how they're supposed to be as I've seen photos of genuine brushes here on Specktra with the same flatter ferrules?

Up till earlier today, I was convinced they were all genuine, now I'm not so sure? Or can some handles be a bit paler when held up to daylight?

I've attached photos so that maybe the kind experts here may possibly be able to discern if there are any incredibly good fakes amongst these.

The last 2, showing the entire brushes lying down, are taken in the evening in electric light, with and without flash, and don't show any paleness in the handles, they all look pretty much identical.

(This is going to be my first attempt at uploading attachments, so I hope it works! If it doesn't, I'll try again in a reply or try posting them on photobucket or somewhere). 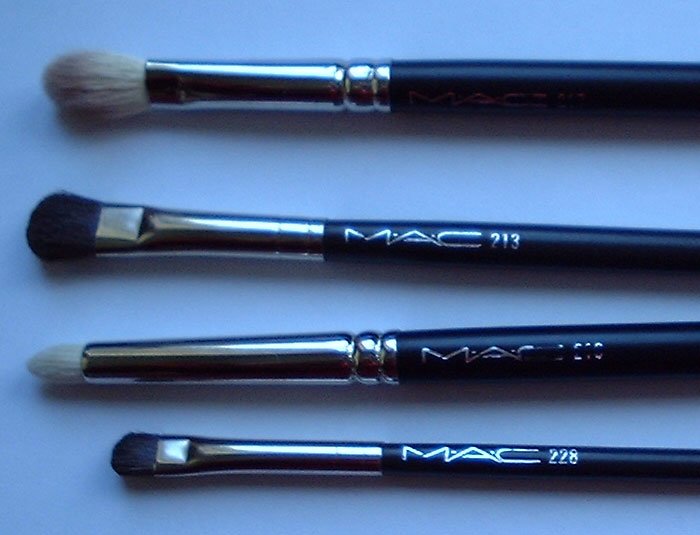 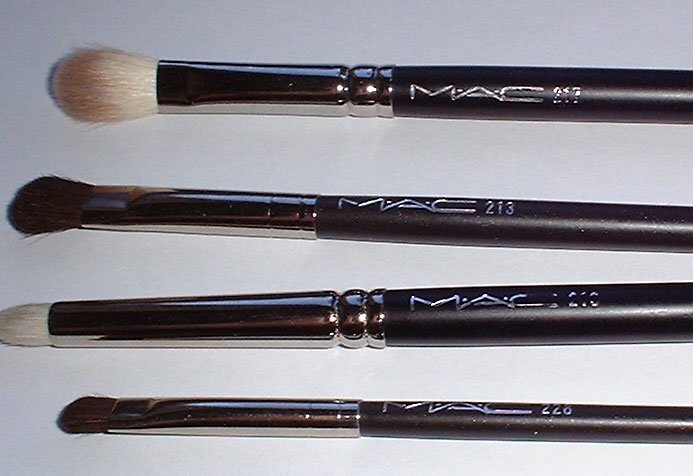 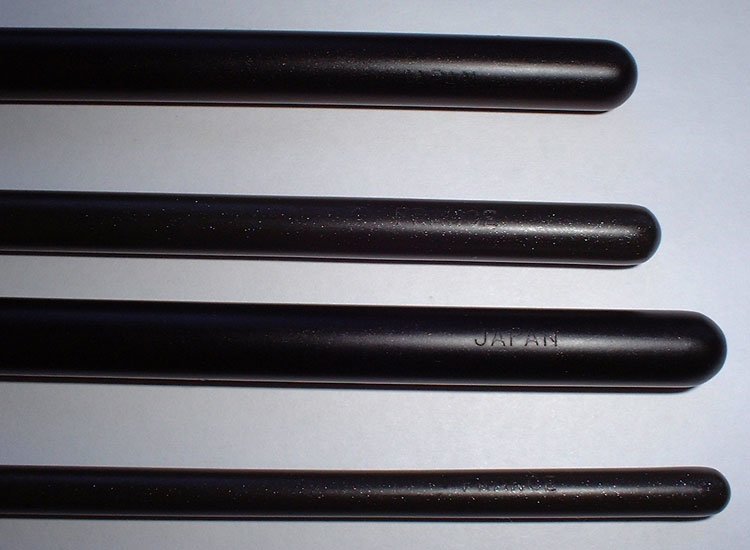 I didn't realise I couldn't upload more than 5 photos, so here are the last 2.

I'm pretty sure that 213 and 238 are fake, I'm sorry. The handles are lighter and they have sparkle to them. But on a lighter note, 210 looks real.

I'm not too familiar with MAC brushes but 213 and 228 gives me the jeepers.

The MAC logo on them looks "cheaply done"..

I've taken some more photos, this time with close-ups of the logos in slightly different lights (not daylight by the window) and slightly different angles as the light from the camera, with or without flash, seems to alter the effect. Sorry for the slightly blurry ones, but I couldn't get any closer than that.

The 2 I'm certain are genuine (one bought in shop) are the 2 in the middle.

Note that one can't tell the difference in colour of the handles in these photos, they all look the same black, all have the same degree of "glitter", which is how they look most of the time. As a reminder from my original post, it's only when held up to a window in bright daylight that the handles on 2 of them look a bit paler.

Apart from that, the bristles are of good quality, don't shed, and wash without problem. I can't see any difference in the logos, and they look identical when in my hand, other than the silver having worn off yet a bit more on the 2 real brushes since the last lot of pictures.

XSqueeze_me, in what way do the logos look "cheaply done", in case I'm missing something?

If these are fake, then they're exceptionally good ones? 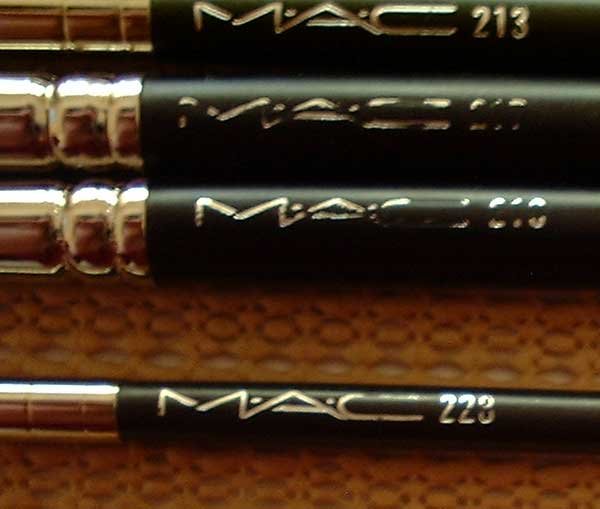 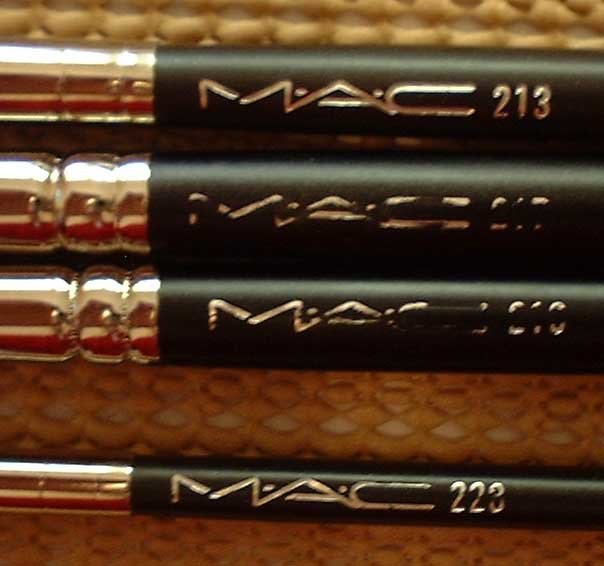 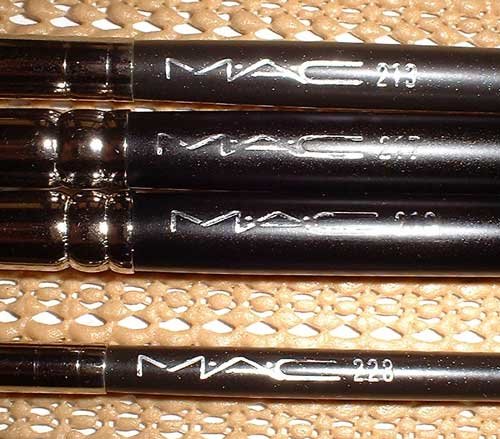 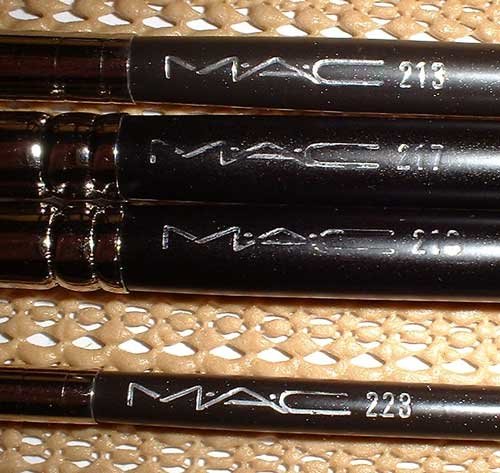 I don't have the bar coded sleeves anymore for the other brushes (all had them) except for the 213, photo attached.

213 & 223 are fakes for sure.
The metal trim supposed to curve in, but the ones on the top and bottom they are quite flat. The handle color is too light as well.
I wouldn't say its a well made fake since its too easy to distinguish.

As for the bar code, why isn't the product origin included? All my brush sleeve mahe Made in Japan (or France) under London W1K except the 187 that has a sticker that says made in Japan.
However, the font on the sleeve is too bold.

Honestly I don't think it should be that hard to make a bar coded sleeve.

Oh MY.... you're quite right, I didn't notice it before. I've just looked at a sleeve that came with a brush from a MAC store (in UK), and yes, the print is slightly fainter and it has "Made in Japan/ M87L-01, Maccosmetics.com" on two lines under the rest of it. Also, the sticker is on the right of the sleeve, whereas the "fake" one is on the left of the sleeve. One of the other fake brushes has a 2nd little sticker with "Made in France" stuck on top of the sticker (the brush was also indented with France on it as its country).

Would anybody else be able to confirm this about the barcode stickers?

Also, I'm sure I saw some brushes in the MAC counter that had flatter ferrules that didn't curve? I don't quite remember though.

Either way, what with the pan shadows now being impossible to tell if fake unless depotted, and the brushes looking seriously real without peering at them with a microscope even if in photos they might show slightly differently, it's getting almost impossible to tell the difference!

I have a sleeve that's on the left as well, but rest all on right.

Here is the problem, the eyeshadow brushes from France seems quite different from the ones from Japan. The differences includes the metal trim did not curve in (or maybe is because 266 is fairly thin?)

The 228 is very very thin as it's a tiny brush head. The MAC website shows it with a flat bit on the end of the ferrule, not curved. The 213 is also a bit thinner than the other two brushes. Both the 228 and 213 have "France" engraved on the handles.

As the MAC website only gives images of the brush heads and not the full brush or the full ferrule, it's impossible to see what it should look like on their site.

I wonder if it might be an idea to have a (pinned?) topic here where people could add images of their real brushes so as to build up a collection of all the brushes? Then we'd be able to see what at least the ferrules should look like, as some seem to flat and others curved.

Yeah, I would like to see a thread like that as well.
Some of the not as popular brushes has not been faked yet, I am sure this kind of guide will help a lot of people especially buying brushes online.

I should go to a MAC counter and see if they have brushes made in France. I wouldn't be surprised to see if there are brushes made in France that has shiny balck handle with sparckle instead of the matte one. (I think I've seen one like that at the counter before, I think its a 224) The fake one probably uses the Franch one as model but changed the product origin to Japan but havn't anything else?

My possibly fake brushes don't have shiny handles, they just have a bit of sparkle in them, but not really any more than my real brush. Both of them are engraved "France". The sticker for one of them had an extra little sticker saying "Made in France".

This topic is getting very interesting, as we discover more and more about some differences. So far, the differences we seem to be seeing with the maybe fake ones are:
I did take a tape measure to measure what XQueeze_me said about the logos, and they're exactly the same measurements, so one isn't longer than the other. The photos might be a bit deceptive as the silver is properly filled in the imprint and doesn't overlap and is very neat. It isn't any lighter than on the real brushes but doesn't rub off easily, one can scrape it off a bit with your nail if you really try. The space in the slash of the upside down V in the middle of the M is ever so slightly wider, but almost negligible. I seem to remember reading somewhere else here that there can be tiny differences sometimes of this nature?

If anybody gets a chance to go to a MAC counter and see if their brushes have any such differences, or if they have brushes made in France which might vary a bit like Loci suggests, it could be interesting. Also, to check the bar codes to see if all of them have the extra two lines under "London WIK". Unfortunately, I can't go to a MAC counter as there isn't one near me for miles. The brush I got was when I was visiting friends for a long weekend in London.

I think it's that I really don't want to scream "fake!" at a seller unless I'm 100% sure, as it wouldn't really be fair on them.

I agree with the rest the 213 looks fake to me. i spotted it straight away.

HAVING sparkles is no sing of being fake. I've bought brushes with sparkle handle in mac stores!!

Is it made in France?

Any further thoughts on these please, as there seems some uncertainty?

I can't see why the 213 right away looks to be fake, would somebody please point out what makes it so obvious?

As I said earlier, I really don't want to scream "fake!" at a seller unless I'm 100% sure, as it wouldn't really be fair on them.

I've just noticed something else. The handles with a paler black have a little bit of a smoother feel to them. They're not shiny but feel a bit shinier than the real ones.