Yesterday, my boyfriend and I adopted two beautiful kitties. The oldest at 8 months is an orange tabby named Stoney. The youngest at 4 months is a long-haired, gray, diluted calico named Stormy. 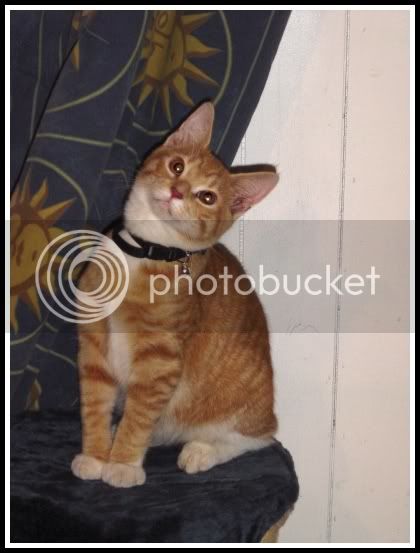 The shelter named him that. Stoney. Joey liked it. And this little man was selling it at the shelter. Being way way way to cute for words.

My beautiful Stormy. She's a bit picky and has a little cold, but she'll be fine.

Stoney is just as vain as I am.

Orange is beautiful. (I'm trying to discourage him from jumping on my make-up, but I couldn't resist these pictures.)

she's not too keen on face pictures. I had to suggest this to her.

*edit* I made a few typos. We both adopted them together. And the gray one is named stormy. The orange is Stoney.

Congrats on your new family members!

Awww, what cutie-pies!! Enjoy them while they're little...they get big so fast! I've got one who's 4 1/2, but he's not quite out of his kitten-phase. Boy can he be destructive!

they are so beautiful!! congratulations on your new furry babies

Beautiful kitties!! Love them!! You rock for adopting!

Aww there adorable I am glad he did a good thing in adopting them.

gorgeous kittys, and tell your boyfriend I said thankyou for saving their lives....!

Thanks everyone. I love them both so much already. So glad to have kitties again.

Thank you for adopting them.

EDIT: And YAY!!! They'll probably have a blast when celebrating Christmas with you and your boyfriend. Bless your hearts!

ps: Did you buy your lovely furries any presents?

awwww! they're so cute! I especially like your tabby

I looooooooove cats
They are beautiful!
I think I couldnt live without one

They are so cuuuuute

!! Kitties are the best.

aside from their freedom, lol. we got them wands, furry mice, and of course, rolling balls with bells. they love those.

And they have a whole couch to tear up that my last kitty (RIP Zeus) started on last year. Not really. We keep having to shoo them away. Bad habit for them to have.